What Is Granulomatosis With Polyangiitis (Wegener’s)? 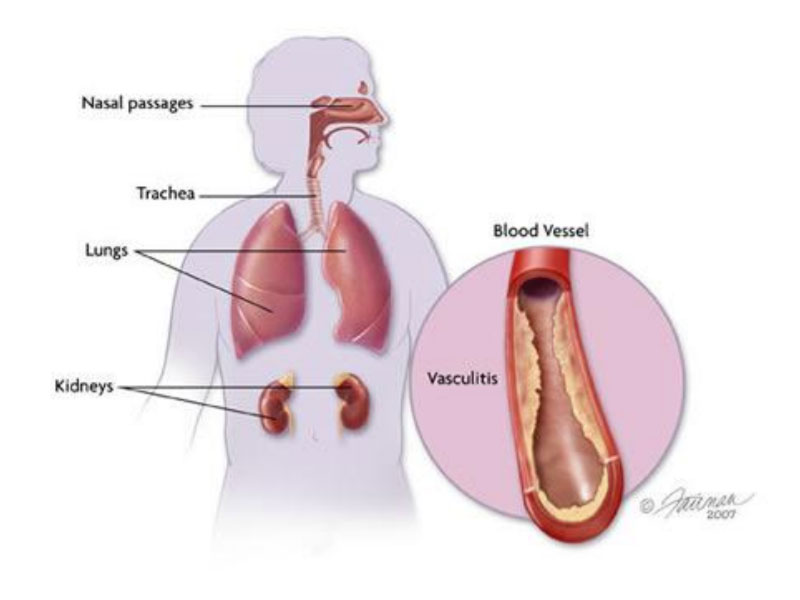 Most commonly, GPA affects the sinuses, lungs and kidneys.

Most commonly, GPA affects the sinuses, lungs and kidneys, but also can affect the eyes, ears, skin, nerves, joints and other organs. Because of the variety of potential organ involvement, a wide range of symptoms can develop over days to months. For 90% of people, the first symptoms appear in the respiratory tract (e.g., nose, sinuses and lungs) and include nasal congestion, frequent nosebleeds, shortness of breath, and cough that may produce bloody phlegm. Other early symptoms can include joint pain, decreased hearing, skin rashes, eye redness and/or vision changes, fatigue, fever, appetite and weight loss, night sweats, and numbness or loss of movement in the fingers, toes or limbs.

Several well-studied therapies are effective in treating GPA. Although permanent organ damage can still occur, the medications used to treat GPA can improve or even resolve organ injury in many instances.

What Causes Granulomatosis With Polyangiitis (Wegener’s)?

The cause of GPA is unknown.

Who Gets Granulomatosis With Polyangiitis (Wegener’s)?

This rare disease is estimated to affect 3 out of every 100,000 people. It affects men and women equally. GPA can occur at any age, but most often between the ages of 40 and 65. It is rare in children.

How Is Granulomatosis With Polyangiitis (Wegener’s) Diagnosed?

Many things play an important role in detecting organ involvement in GPA, including: symptoms; physical examination; laboratory testing; and imaging studies such as X-rays, CT scans or MRI. As symptoms may not develop in the kidneys and the lungs, two of the most important sites of disease, lab tests and imaging are used to look for problems in these organs. For example, if the doctor suspects GPA, he or she may order a urinalysis, measurement of renal function (drawing blood to test levels of creatinine) and lung imaging through a chest X-ray or CT scan.

The diagnosis of GPA is based on clinical features affecting typical organ sites together with the identification of blood vessel and tissue inflammation in those organs. Because of this, most physicians will recommend a biopsy of the tissues involved to look under the microscope for evidence of characteristic changes.

Many people with GPA test positive for proteins in their blood called antineutrophil cytoplasmic antibodies, which is commonly called ANCA. A blood test positive for ANCA supports the need for further examination for GPA; it usually does not replace the need for a tissue biopsy. In rare instances where people have certain clinical features, a positive test may provide enough evidence to make a diagnosis of GPA. However, ANCA cannot be found in up to 20% of people with well-diagnosed GPA, so a negative ANCA test does not eliminate the possibility of GPA in patients with other characteristic clinical features.

How Is Granulomatosis With Polyangiitis (Wegener’s) Treated?

Active GPA involving a critical organ site requires treatment to prevent ongoing inflammation that can result in organ failure. In the absence of treatment, GPA can worsen rapidly, leading to potentially life-threatening kidney or lung failure. Treatment choices are based on the organs affected, disease severity and individual medical factors.

Those with active severe disease often receive a glucocorticoid (steroid) medication such as prednisone combined with cyclophosphamide (Cytoxan), a chemotherapy type of medication. Prednisone is begun at a high dose and gradually reduced. Cyclophosphamide is given for 3-6 months. Those who improve are then switched to another medication such as methotrexate (Rheumatrex, Trexall) or azathioprine (Imuran, Azasan) for 2 or more years. Another recent option for the treatment of severe granulomatosis with polyangiitis is rituximab(Rituxan) combined with glucocorticoids. Rituximab is a biologic agent given by vein that targets a type of immune cell called the B lymphocyte. The patient and his or her doctor will work together to decide whether the patient should receive cyclophosphamide or rituximab for severe GPA. Those with active but not severe disease may be treated with prednisone and methotrexate. Each medication has significant side effects that must be considered to minimize or prevent the risk of serious side effects.

All of the medications used to treat GPA have significant side effects to consider. Minimizing or preventing the risk of serious side effects is an important part of caring for someone with GPA.

Living With Granulomatosis With Polyangiitis (Wegener’s)

The impact of GPA can vary greatly, depending on its severity, the organs involved, and any complications related to the disease or its treatment. People with GPA need ongoing checkups that include laboratory studies, imaging tests, and clinic visits with their doctor. Such monitoring is essential to follow the course of GPA and to detect or prevent short- or long-term treatment-related complications.

Even with effective treatment, recurrences (relapses) are common. Relapses may resemble or differ from the initial onset, so new symptoms should be reported to the medical practitioner as soon as possible. Regular doctor visits together with monitoring of laboratory tests and imaging studies can help to detect relapses early.

The Rheumatologist’s Role In Treating Granulomatosis With Polyangiitis (Wegener’s)

Depending on the organ sites involved, people with GPA frequently require care from numerous physician specialists, each of whom contributes in a valuable way. Within this working team, however, it remains important to identify a specific doctor to prescribe and check for problems with related medications. This is typically the rheumatologist who is trained to use these medications to effectively treat GPA while minimizing the potential for side effects.

Depending on the organ sites involved, people with GPA frequently require care from numerous physician specialists, each of whom contributes in a valuable way.